Why does my dog sleep this way… 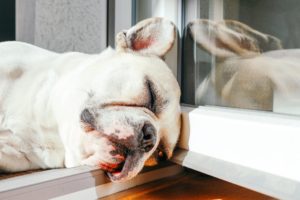 It’s pretty common knowledge that cats spend a lot of time sleeping every day. But you might be surprised to learn that pooches like to snooze 12 to 14 hours a day, too. And puppies, senior dogs and dogs with illnesses require even more sleep per day.

Experts say that the sleeping position of a dog reveals something about their personality. Here are five of the most common canine sleeping positions and their possible meaning. Which does your dog identify with?

1. The Lion Pose — If your dog sleeps with his head on top of his paws he is probably just resting rather than in a deep sleep state.

2. The Side Sleeper — This is the most common canine sleeping position and reveals that your pooch is relaxed and comfortable and at ease with his surroundings. Dogs who start out in the Lion sleeping position will often roll onto their side when they fall into a deeper sleep, says Dr. Stanley Coren, professor emeritus in the Psychology Department at the University of British Columbia and a Pet MD consultant.

3. The Donut — When dogs curl up into little balls it’s almost as if they are trying to appear as small as possible. Often, dogs in shelters will sleep this way and it helps them regulate body temperature, according to Dr. Katherine Houpt, professor emeritus of behavioral medicine at Cornell University’s College of Veterinary Medicine.

4. The Superman — In this position, dogs sleep stretched out with their front legs in front of their heads and back legs kicked out behind their butts. Both Coren and Houpt believe the Superman position is a response to body temperature; when the surface the dog is lying on is cooler than the dog’s body temperature. 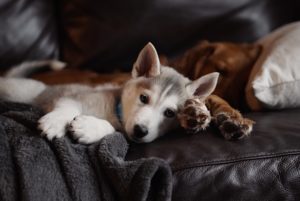 5. The Cuddle Bug — When your dog snuggles up against you or another canine or human family member it is most likely a learned feeling of comfort held over from puppyhood. It’s also a body temperature regulator.

Do you see your pooch in any of these common canine sleeping positions? Check out the full story at https://www.petmd.com/dog/wellness/5-dog-sleeping-positions-and-what-they-mean.